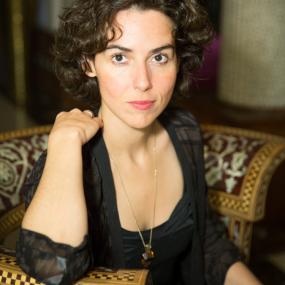 The Eco-Music Big Band is a 15-piece professional big band that spans many generations and includes some of the nation’s most acclaimed jazz musicians. By adding violin and cello to the standard big band cohort, the Eco-Music Big Band performs a dynamic and exclusive repertoire that fuses virtuosic free-jazz with heavy metal, hip hop, and modern post-classical influence. Founded by composer and baritone saxophone virtuoso Fred Ho before his death in 2014, the Eco-Music Big Band is now led by Marie Incontrera, his final composition/bandleading protégé. Hailed as “...music and activism at its finest” (DooBeeDooBeeDoo), the Eco-Music Big Band regularly commissions and performs works by younger and emerging composers, including its band members Livio Almeida, Marie Incontrera, Albert Marques, and Zack and Adam O'Farrill. The band also performs the exclusive repertoire of the music of its late founder, Fred Ho, and the 1970s jazz composer and bandleader Cal Massey. During the 2015-2016 season, the Eco-Music Big Band will be recording and releasing its first studio album, COLORS OF RESISTANCE; the band will also be featured as part of the BAM Next Wave Festival, New York Comic Con's Super Week Festival, and the American Composers Orchestra SONiC Festival.  http://scientific-soul.squarespace.com/ecomusicbigband

OFF THE CLIFF is Clarice Assad's four piece ensemble that mixes jazz, classical, avant garde, Brazilian and world music. They work with a variety of instruments in different combinations and have performed internationally. Keita Ogawa, percussionist, and João Luiz Rezende, guitarist, complete the trio.

A composer, pianist, and an overall practitioner of vocalese, Brazilian native Clarice has had numerous successful compositions and performances in the realms of jazz, classical, ballet, theater and world music.  She has performed at venues including Carnegie Hall, Concertgebow in Amsterdam, San Francisco Jazz, and the Palais des Beaux Arts in Brussels.  As a vocalist, Clarice explores technically innovated singing styles.

Hailing originally from Nagasaki, Japan, Keita is one of the most versatile and sought-after percussionists in New York City. Since his arrival in America, Keita has performed with some of the biggest names in modern music including Yo-yo-ma, Danilo Perez, Cyro Baptista and the Boston Symphony Orchestra.

Guitarist, João Luiz Rezende, completes the trio. Born in São Paulo, João Luiz began his musical studies at age 11 and has gone on to gain international acclaim as one of the new breed of Brazilian guitarists who integrates traditional Brazilian music with jazz and classical genres.

Brazilian-American Clarice Assad is a Grammy-nominated composer, pianist, and vocalist. Clarice’s music has been commissioned by Carnegie Hall, Fundação OSESP, Cabrillo Festival of Contemporary Music, the New Chamber Orchestra, Concordia Chamber Players, BRAVO! Music Festival, among others.  Her works has been recorded and performed by Nadja Salerno-Sonnenberg, Yo-Yo Ma, Chanticleer, the Turtle Island String Quartet, LA Guitar Quartet, Anne-Marie McDermott, to name a few.  Her music has been performed by internationally acclaimed orchestras including the Philadelphia Orchestra, Tokyo Symphony, Queensland Symphony, the Orquestra Sinfônica de São Paulo, and many more.

Clarice is the recipient of such awards as the Aaron Copland Award, several ASCAP awards in composition, Meet The Composers Fellowship, NPR’s All Songs Considered, and many others. She has performed at venues including Jazz at Lincoln Center in New York City and Doha, Qatar, the Caramoor International Jazz Festival, Carnegie Hall, The Metropolitan Museum of Art, and the Palais des Beaux Arts in Brussels, Belgium. She has recorded four solo albums. She holds a BM with honors from the Roosevelt University and a MM from The University of Michigan School of Music. http://www.clariceassad.com/