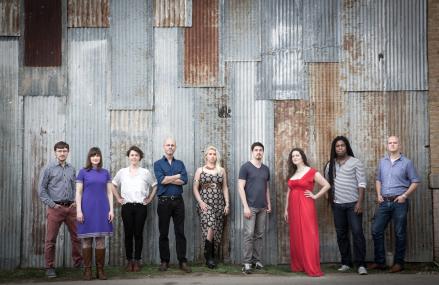 "High Done No Why To" - Roomful of Teeth

Roomful of Teeth - The Ascendant: The Beginning And (Wally Gunn) by newamrecords

Roomful of Teeth - The Ascendant: The Beginning And (Wally Gunn) by newamrecords
Buy Tickets

WILLIAM BRITTELLE: High Done No Why To

The GRAMMY-winning vocal ensemble continually mines the expressive potential of the human voice, with new musical gems discovered by composers from Brooklyn and beyond. Performed at the city’s newest venue for musical experimentation and discovery.

Roomful of Teeth is a GRAMMY-winning vocal project dedicated to mining the expressive potential of the human voice. Through study with masters from singing traditions the world over, the eight-voice ensemble continually expands its vocabulary of singing techniques and, through an ongoing commissioning process, forges a new repertoire without borders. Their pair of albums have garnered a great deal of attention in the world of classical, chamber, and new music.

Upcoming projects in 2015-2016 include The Colorado, a music driven documentary film that explores water, land and survival in the Colorado River Basin (featuring former Kronos Quartet cellist Jeffrey Zeigler and Wilco’s Glenn Kotche); concerts with the Seattle Symphony performing Berio's Sinfonia; collaborations with NOW Ensemble and the American Contemporary Music Ensemble (ACME); appearances at new music festivals in the US, Mexico, Vancouver, South Korea and Turkey; and partnerships with over a dozen higher education institutions across the country.  www.roomfulofteeth.org

Get 20% off and preferred seating with a SONiCPass!