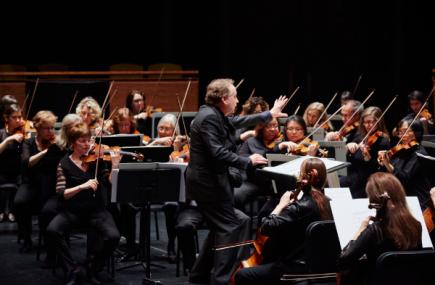 Now in its 38th season, American Composers Orchestra is the only orchestra in the world dedicated to the creation, performance, preservation, and promulgation of music by American composers. ACO makes the creation of new opportunities for American composers and new American orchestral music its central purpose. Through concerts at Carnegie Hall and other venues, recordings, internet and radio broadcasts, educational programs, New Music Readings, and commissions, ACO identifies today’s brightest emerging composers, champions prominent established composers as well as those lesser-known, and increases regional, national, and international awareness of the infinite variety of American orchestral music, reflecting geographic, stylistic, and temporal diversity. ACO also serves as an incubator of ideas, research, and talent, as a catalyst for growth and change among orchestras, and as an advocate for American composers and their music.

To date, ACO has performed music by more than 700 American composers, including nearly 300 world premieres and newly commissioned works. In addition to SONiC, orchestra’s innovative programs have included Sonidos de las Américas, six annual festivals devoted to Latin American composers and their music; Coming to America, a program immersing audiences in the ongoing evolution of American music through the work of immigrant composers; Orchestra Tech, a long-term initiative to integrate new digital technologies in the symphony orchestra; Improvise!, a festival devoted to the exploration of improvisation and the orchestra; coLABoratory: Playing It UNsafe, a new laboratory for the research and development of experimental new works for orchestra; and Orchestra Underground, ACO’s entrepreneurial cutting-edge orchestral ensemble that embraces new technology, eclectic instruments, influences, and spatial orientation of the orchestra, new experiments in the concert format, and multimedia and multidisciplinary collaborations.

Composer development has been at the core of ACO's mission since its founding. In addition to its annual Underwood New Music Readings and Commission, ACO also provides a range of additional educational and professional development activities, including composer residencies and fellowships. In 2008, ACO launched EarShot, a multi-institutional network that assists orchestras around the country in mounting new music readings. Recent and upcoming Earshot programs have included the Detroit, Berkeley, La Jolla, Nashville, Memphis, Colorado, San Diego Symphonies, the New York Philharmonic, New York Youth Symphony, and the Buffalo Philharmonic Orchestra. For more information visit www.EarShotnetwork.org. The Jazz Composers Orchestra Institute, launched in 2010 and continuing in 2015, supports jazz artists who desire to write for the symphony.

Among the honors ACO has received are special awards from the American Academy of Arts and Letters and from BMI recognizing the orchestra’s outstanding contribution to American music. ASCAP has awarded its annual prize for adventurous programming to ACO 36 times, singling out ACO as “the orchestra that has done the most for American music in the United States.” ACO received the inaugural MetLife Award for Excellence in Community Engagement, and a proclamation from the New York City Council. In 2015, ACO was awarded the Champion of New Music Award by American Composers Forum.

Get preferred seating with a SONiCPass!