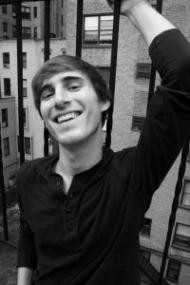 Conrad Winslow’s instrumental music has been commissioned by Carnegie Hall, the Albany Symphony Orchestra, the New York Youth Symphony, New York City Ballet’s Choreographic Institute, the Juilliard Orchestra, the New Juilliard Ensemble, and the NYU Symphony, among many others. Conrad was featured in the 2008 Underwood Readings with American Composers Orchestra. His songs have been presented by The New York Festival of Song and The Coterie. Awards and support have come from ASCAP, The Jerome Fund, New York Youth Symphony, Yale Glee Club, The Juilliard School, and New Music USA. Current projects include directing the Wild Shore Festival for New Music in Homer, Alaska where he was raised. Recent commissions include work for the International Double Reed Society, Cadillac Moon Ensemble, and a ballet score for choreographer Justin Peck. He has a forthcoming recording with Gaudete Brass, entitled ‘Record for a Lost Tribe.’

He holds a MM in Composition from the Juilliard School, an MM degree in film scoring from NYU, and an AB degree in Music from Rollins College.